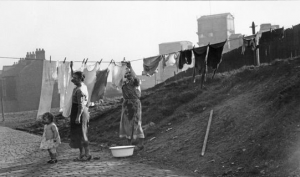 These mining communities developed their own unique culture, customs, myths and even language. People from Durham mining villages were known as pit-yakkers and often spoke a recognised separate dialect of English known as Pitmatic. When pitmen were exchanging stories of colliery life, usually very grim stories, they would do it in ‘pitmatik’, which is Scandinavian in origin, far nearer to the Norse than the ordinary Durham dialect. It was an excellent medium for grim tales of accidents far underground & the sagas and secrets of the deep pits..

Some examples of this culture and language…

Emma Gaskins (or Gascoine) and Thomas Hutt were the parents... END_OF_DOCUMENT_TOKEN_TO_BE_REPLACED

Thomas Hutt was born on 1 May 1831 in the... END_OF_DOCUMENT_TOKEN_TO_BE_REPLACED