Emma Hutt nee Gaskins had sadly died during surgery to remove an ovarian mass on 24th February 1873 in Christchurch, North Canterbury, at the age of 42, and was buried in Barbados Street Cemetery in an unmarked grave in Christchurch, Canterbury. Thomas Hutt was a widower aged just 42 years.  His children were aged as follows:

At the time of Emma’s death in 1873, the family were living at South Moeraki Downs, now called Cust in North Canterbury, New Zealand.

What became of Thomas and their children? It would have been incredibly difficult for Thomas to care for them as well as work and provide for the family. Thomas would have needed to marry as quickly as possible or perhaps board the children with either other family, friends, neighbors or perhaps even strangers.

We can not know what happened to all the children but we have been able to find information to suggest that at this time, things went from bad to worse for the family. What was meant to be a fresh start and a new life in the promised land has turned to tragedy and hardship within a decade of their arrival.

The marriage of Thomas Hutt to Jane Doig nee Wilson 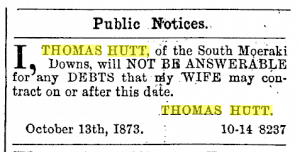 There are multiple newspaper clippings from the time detailing the case of Wife Desertion brought against Thomas Hutt. Thomas became highly suspicious of her and believed Jane wanted rid of him so she could find a new husband.

After their relationship ended, Thomas felt that her previous husband may actually still be alive and therefore required to provide for her and Jane has no proof of his death.

Jane alleged cruelty and mistreatment at the hands of Thomas, stating he had ill-used her and wasn’t providing adequate food for her.

Another article suggests Thomas pushed her out of the house, slammed the door in her face and incited his sons to give her abuse.

A lawyer for Thomas alleged that there was no proof her former husband was dead and that she appeared “very ready at securing husbands”.

They were wrong. New Zealand Births, Deaths and Marriages show that Jane’s husband Robert Doig had in fact died in 1871. Jane was free to marry Thomas and he was therefore responsible to support her following their separation.

Thomas Hutt and his “neglected children”.

At some stage between 1873 and 1881, Thomas and some if his children have moved further South from Moeraki Downs/Cust and are living near Temuka in South Canterbury.

By all accounts some of the Hutt children are by now, running wild. In 1876, eldest son Henry is apprehended for larceny

Click here to learn about the lives of the Hutt children including the tragic death of second son, John Thomas Hutt in 1878, killed by falling from a train. (COMING SOON).

Temuka November 1881. Thomas is before the courts again charged with neglect of his two youngest sons William (11) and James (9).

Thomas had tried boarding them out but they had appeared starving, so he had brought them home and the boys were instead living in a tent down a nearby river bed.

Sadly for William and James, they were sentenced to 3 and 5 years respectively at the Burnham Industrial School. This institution was opened by the New Zealand Government in 1874 in order to provide both for the welfare of destitute and neglected children, and also for the reformation of what were considered criminal children. Papers Past has an interesting article written about the “school” around the time the Hutt children were incarcerated.

Emma Gaskins (or Gascoine) and Thomas Hutt were the parents... END_OF_DOCUMENT_TOKEN_TO_BE_REPLACED

Thomas Hutt was born on 1 May 1831 in the... END_OF_DOCUMENT_TOKEN_TO_BE_REPLACED