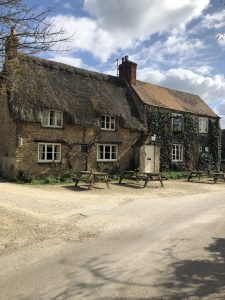 The Blue Boar c.1606. Longworth Village, Berkshire, England. Many a Hutt would have enjoyed a pint or two at this historic location.

Thomas Hutt was born on 1 May 1831 in the tiny hamlet of Draycott Moor, Longworth, Berkshire England. This is a rural and very picturesque part of Oxfordshire and the Hutt’s were and still are well established in the area. Thomas was the son of Joseph Hutt and Mary Painton. He had at least three siblings…Richard, Albert and Sarah Maria who died as an infant.

The Thames river (at this point, no more than 5-6 metres wide) meanders quietly along nearby. The people that lived in this area were both rural and river people and at the time, the Thames was a busy highway linking many villages and cities. There is no doubt that Emma and Thomas had a very close association with this iconic river.

Thomas and Emma Hutt were the parents of Mary Ann Hutt, (married to Joseph Alfred Abbott) and are one of our “first families” to arrive in New Zealand. Emma and Thomas had twelve children together but unfortunately Emma died following surgery to remove an ovarian mass on 26 February 1873 in Cust, North Canterbury, at the age of 42, and was buried in Barbados Street Cemetery in an unmarked grave in Christchurch, Canterbury.

Thomas then married Jane Doig Wilson but this was not a happy union. Things went from bad to worse for Thomas. He faced further difficulties as a widower trying to take care of his young children. Click here to learn more. He died on 25 February 1906 in Timaru, Canterbury, at the age of 74.

Below – Images of St Mary’s Church Longworth, Berkshire, England. Thomas was baptised here at the font shown on 31 May 1831. The churchyard is scattered with Hutt headstones. The gravestone below belongs to his first cousin, Joseph and his wife Margaret. This is the site of many Hutt family baptisms, weddings and burials. Taken by Nikki Eagle, March 2019. Census night 1841 – Thomas (10) is living at Draycott Moor with his father Joseph (30 and an agricultural labourer) and brothers Richard (13) and Albert (8). Their mother Mary, died 4 years earlier. They are living at the home of their paternal Uncle and Aunt – Thomas and Jane Hutt and cousins Jesse (7), Henry (4) and Elizabeth (2).

On 17th January 1849, Emma Gaskins (18) gives birth to her baby daughter Maria Gaskins at Noah’s Ark – father unnamed. Was this baby actually the daughter of Thomas Hutt. Her name was Maria and that is certainly a common Hutt family name. Thomas’s infant sister who died as a child was named Sarah Maria as was one of his cousins.

On Census night – 30th March. 1851, Thomas Hutt (20), is living with the Stone family in his childhood hamlet of Draycott Moor near Longworth in Berkshire. He’s working as an agricultural labourer. His brother Albert is also living and working with him at the Stone’s property.

Skip forward 10 years to the 1861 census. Judging by the birthplace of their children, Thomas and Emma must have moved to Alperton, Middlesex around 1852 then on to Ealing near London. They now share the same last name and have five children…did they get married sometime before the birth of first son Henry in 1852? The 1861 census shows the children as follows: Henry (9), John (7), George (3), Charles (4 mths) and Mary Ann (5). So far no record of their marriage has been unearthed. Why have they moved from their respective idyllic sleepy villages and headed for the city? Work is becoming more and more scarce in rural areas…hamlets and small holdings that were originally designed to provide for the needs of one large family are strained by the time those children have children of their own…Like many families desperate for work, Emma and Thomas have moved to the outskirts on London and are living at Ealing Common by 1861.

Little Emily Hutt was born, 7th November 1862 just a month before the entire family bravely said goodbye to the Old Country and headed to New Zealand on 10th December 1862.

Following Emma’s untimely death in 1873, Thomas then married Jane Doig Wilson but this was not a happy union. Things went from bad to worse for Thomas. He faced further difficulties as a widower he struggled to take care of his young children. In 1905, he developed cancer and died of a cerebral hemorrhage on 25th February 1906 in Timaru, Canterbury, at the age of 74 – almost 33 years to the day since losing Emma.

His daughter Emily Elizabeth was the informant at his time of death but sadly he must have become estranged from several of his children. His eldest son Henry William Hutt had died in Worser Bay near Wellington of heart failure on 23rd November 1907 after arriving recently from Nelson. His death certificate holds no details of his family – a new acquaintance recalled that he had a sister living at Palmerston North and a father living at Ashburton. However Thomas Hutt had died some 18 months earlier and Henry had been unaware of this.

Emma Gaskins (or Gascoine) and Thomas Hutt were the parents... END_OF_DOCUMENT_TOKEN_TO_BE_REPLACED

Thomas Hutt was born on 1 May 1831 in the... END_OF_DOCUMENT_TOKEN_TO_BE_REPLACED